Kurt Eichenwald Money Quote saying Tax Bill being considered by Congress is likely to push the U.S. trillions further into debt crush what is best about America in order to benefit the rich. Kurt Eichenwald said:

If this tax bill is not stopped, it will be the end of the American era. Public education crushed, brain drain of advanced degrees, trillions in debt, crippling Medicare. For what? Cause rich people really really promise THIS time to use dollars for jobs, when never did before?
— Kurt Eichenwald

If this tax bill is not stopped, it will be the end of the American era. Public education crushed, brain drain of advanced degrees, trillions in debt, crippling Medicare. For what? Cause rich ppl really really promise THIS time to use $ for jobs, when never did before? 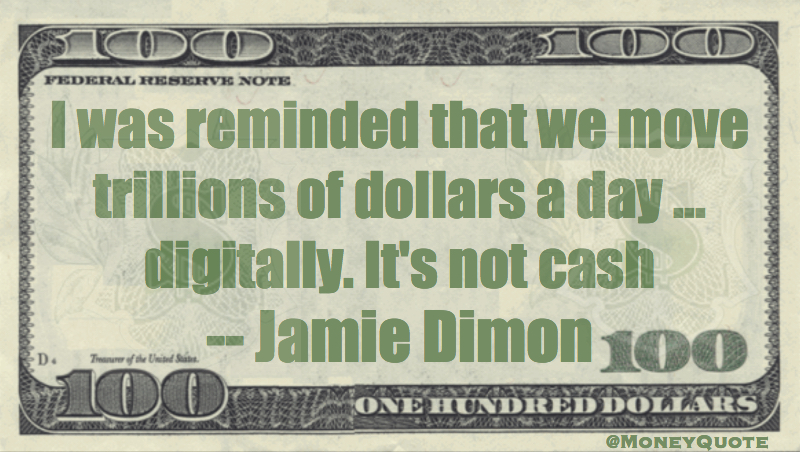 “I was reminded that we move trillions of dollars a day … digitally. It’s not cash” — Jamie Dimon

Share the Jamie Dimon Money quote image above on your site:

Donald Trump Money Quote saying in a dystopian view of America that everything is crumbling while we spend our dollars outside the U.S. and create other countries wealth. Donald Trump said:

[We] spent trillions and trillions of dollars overseas while America’s infrastructure has fallen into disrepair and decay. We’ve made other countries rich while the wealth, strength, and confidence of our country has dissipated over the horizon
— Donald Trump

We’ve been fighting the War on Poverty for 50 years now. And I don’t think you can call it anything but a stalemate. The federal government has spent trillions of dollars. And yet today, if you were raised poor, you’re just as likely to stay poor as you were 50 years ago
— Paul Ryan

Bernie Sanders Money Quotation saying any bank considered too large to fail should be broken up and investment activities curtailed. Bernie Sanders said:

In my view, if a bank is too big to fail, it is too big to exist. Wall Street cannot continue to be an island unto itself investing trillions in risky financial instruments
— Bernie Sanders