Goethe on Running Out of Cash

Johann Wolfgang von Goethe Money Quotation saying we often don’t care that our cash is running out until is is almost gone and think nothing of time until it runs out. Goethe said:

Many people take no care of their money till they come nearly to the end of it, and others do just the same with their time
— Goethe

Samuel Johnson on Burdens of Time

Samuel Johnson Money Quotation saying we control neither cash nor the clock and that weighs heavily on those who have too much of either one. Samuel Johnson said:

Money and time are the heaviest burdens of life, and the unhappiest of all mortals are those who have more of either than they know how to use
— Samuel Johnson

Steve Jobs Money Quote valuing time over money and emphasizing that the importance of intangibles exceed the worth of all material wealth. Steve Jobs said: “My favorite things in life don’t cost any money. It’s really clear that the most precious resource we all have is time” — Steve Jobs

Share the Steve Jobs Money quote image above on your site:

Philip A. Fisher Money Quotation saying Do you think you can predict market timing accurately? I predict that you will be wrong 50% of the time – bet big on the winning times and lose small on the other half. Philip A. Fisher said:

It is often much easier to tell what will happen to the price of a stock than how much time will elapse before it happens
— Philip A. Fisher 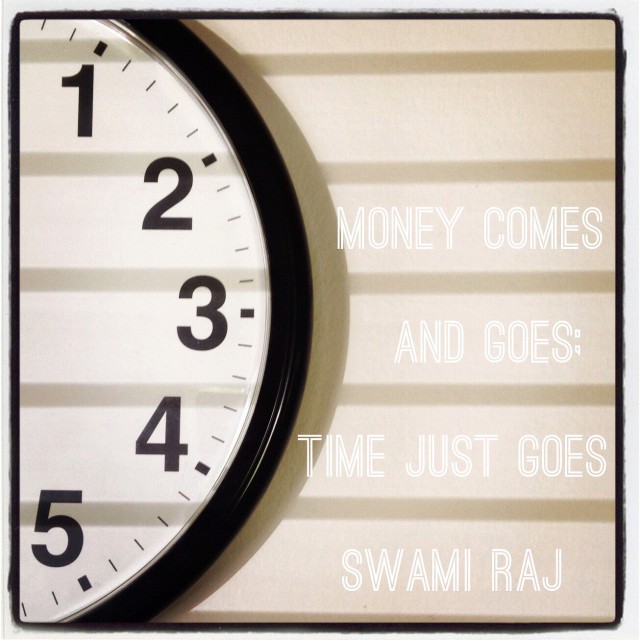 Money Quotation saying cash can arrive and pass and then return many times, but existence is measured by passing once and never returning. Swami Raj said:

James Taylor Money Quote saying time has a way of deflating your bank accounts, but having more on the bottom line can’t add any time to your life. James Taylor said:

Time will take your money, but money won’t buy time