Oprah Winfrey on What Really Matters

Oprah Winfrey on Success in Work

Oprah Winfrey Money Quotation saying following a path of passion in your work will lead to a destination of success. Oprah Winfrey said:

You know you are on the road to success if you would do your job, and not be paid for it

Will Smith on Amplification of Cash

Will Smith Money Quotation saying that cash tends to bring clarity and volume to things we already possess. Will Smith said: “Money and success don’t change people; they merely amplify what is already there” — Will Smith

Share the Will Smith Money quote image above on your site: 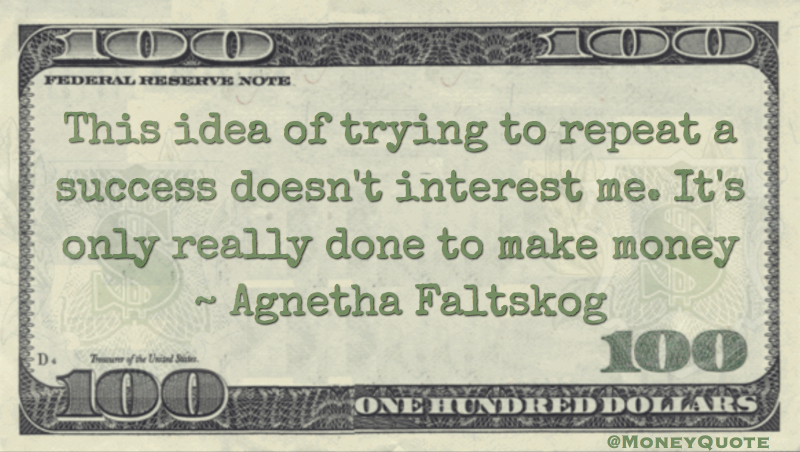 “This idea of trying to repeat a success doesn’t interest me. It’s only really done to make money” — Agnetha Faltskog

Share the Agnetha Faltskog Money quote image above on your site:

Nelson Mandela Money Quote saying imprisoned dreamers cannot be successes no matter the size of their bank accounts, one must be free to access the money and free to spend it. Nelson Mandela said: “Money won’t create success, the freedom to make it will” — Nelson Mandela

Ray Kroc Money Quotation saying Those who put profit above value will go nowhere because money isn’t the point for the customer interested in the product or service you sell. Ray Kroc said:

If you work just for money, you’ll never make it, but if you love what you’re doing and you always put the customer first, success will be yours — Ray Kroc

Terry Starbucker Money Quotation saying If you love and believe in your business idea, it’s easy to keep a poker face while committing to success with investors. Terry Starbucker said:

I love how these entrepreneurs will raise the stakes with less than a perfect hand – i.e. like talking about the latest version of a product that is really still in someone’s head. Putting that bet down is like a self-fulfilling prophesy – this hand WILL be Aces… eventually
— Terry Starbucker

Johnny Cash Money Quotation saying stress over cash is one of our biggest worries, so once we rid ourselves of that worry, many other worries emerge. Johnny Cash said: “Success is having to worry about every damn thing in the world, except money” — Johnny Cash

Share the Johnny Cash Money quote image above on your site: