“No illusion is more crucial than the illusion that great success and huge money buy you immunity from the common ills of mankind, such as cars that won’t start” — Larry McMurtry

Share the Larry McMurtry Money quote image above on your site: “I’m not really interested in making money. That’s always come as the result of success, but it’s not been my goal, and I’ve had a tough time proving that to people” — Steven Spielberg

Share the Steven Spielberg Money quote image above on your site:

Dalai Lama Money Quote saying inner peace in our hearts is a greater measure of success than money in the bank. Dalai Lama said: 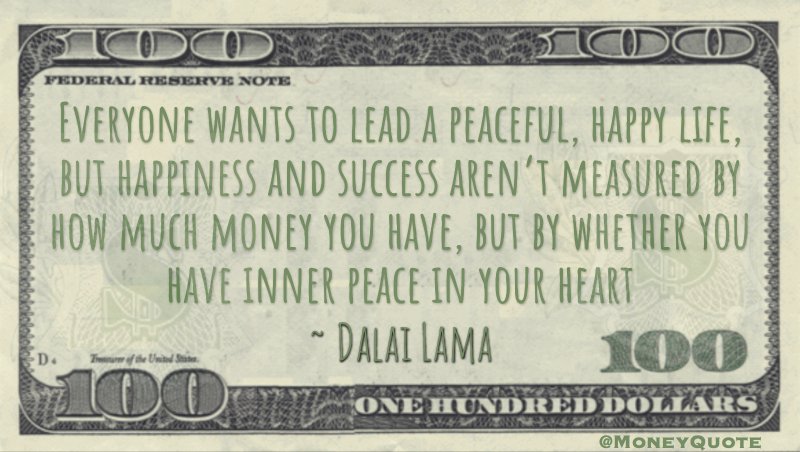 “Everyone wants to lead a peaceful, happy life, but happiness and success aren’t measured by how much money you have, but by whether you have inner peace in your heart” — Dalai Lama

Share the Dalai Lama Money quote image above on your site:

Everyone wants to lead a peaceful, happy life, but happiness and success aren’t measured by how much money you have, but by whether you have inner peace in your heart.

Tony Gaskins Money Quote saying if home life is not successful, then money is meaningless and hollow in a failed home life. Tony Gaskins said: 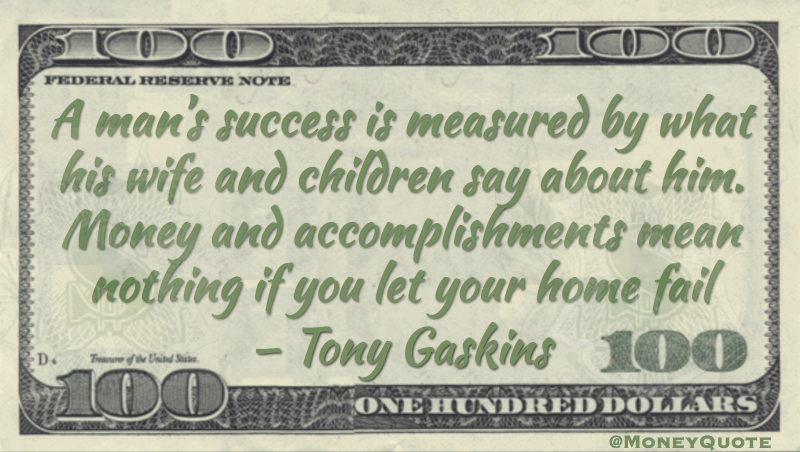 “A man’s success is measured by what his wife and children say about him. Money and accomplishments mean nothing if you let your home fail” — Tony Gaskins

Share the Tony Gaskins Money quote image above on your site:

George Orwell: Money What God Used to Be

Money is what God used to be. Good and evil have no meaning any longer except failure and success. Hence the profoundly significant phrase, to make good
— George Orwell

Sheri Dillon Money Quote saying as his conflict of interest attorney that many wanted Trump elected because he was a successful businessman so should find no concern with his financial interests. Sheri Dillon said:

The American people were well aware of President-elect Trump’s business empire and financial interests when they voted. Many people voted for him precisely because of his business success
— Sheri Dillon

H.W. Charles Money Quote saying proving that what we focus on grows, jews are taught that wealth is a gift and are real spiritual rewards from god. H.W. Charles said:

While many ethnic and religious groups are mainly focused on the afterlife and downplaying this world, Jews view wealth and success as a blessing and
gift from God
— H.W. Charles