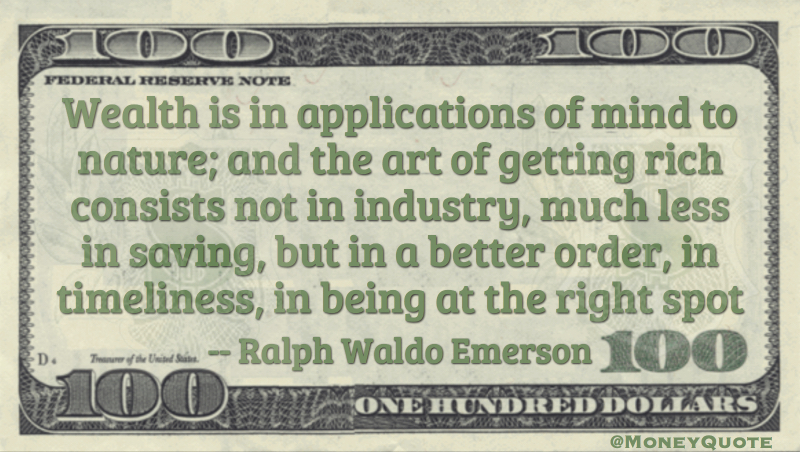 “Wealth is in applications of mind to nature; and the art of getting rich consists not in industry, much less in saving, but in a better order, in timeliness, in being at the right spot” — Ralph Waldo Emerson

Benjamin Franklin: Saving, Getting to Wealth

Benjamin Franklin Money Quote saying we all focus most attention to gaining greater income or more possessions to be wealthy, but keeping what we get is what brings wealth. Benjamin Franklin said:

If you would be wealthy, think of saving as well as getting
— Benjamin Franklin

Victor Borge Money Quote saying the twice-yearly time change, or daylight savings, may be a way to save when we can find no other options. Victor Borge said:

I don’t mind going back to daylight saving time. With inflation, the hour will be the only thing I’ve saved all year
— Victor Borge

Jean Chatzky: Saving for Bigger One$

By definition, saving — for anything – requires us to not get things now so that we can get bigger ones later
— Jean Chatzky

Warren Buffett: Spend Only After Saving 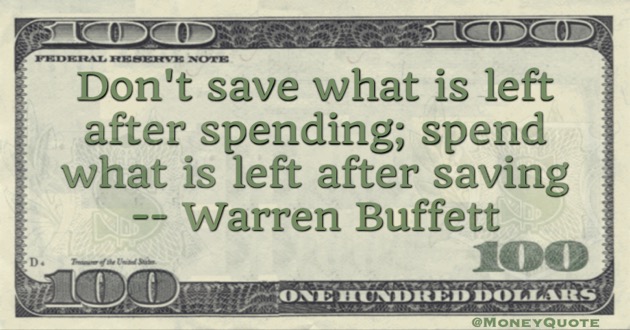 
Share the Warren Buffett Money quote image above on your site:

Senator Rand Paul: Only in Washington

William Shatner on the Wrong of Saving “If saving money is wrong, I don’t want to be right!” — William Shatner

Share the William Shatner Money quote image above on your site:

I never heard of an old man forgetting where he had buried his money!