Robert Orben Money Quote saying looking at the list of wealthiest people to see if you are there seems silly for all but a very few people. Robert Orben said:

Every day I get up and look through the Forbes list of the richest people in America. If I’m not there, I go to work
— Robert Orben

Isaiah: Why Spend on What Doesn’t Satisfy?

Isaiah bible quote asking why are we spending money for what is not satisfying to our needs? Isaiah 55:2 says:

Why spend money on what is not bread, and your labor on what does not satisfy? Listen, listen to me, and eat what is good, and your soul will delight in the richest of fare
— Isaiah 55:2 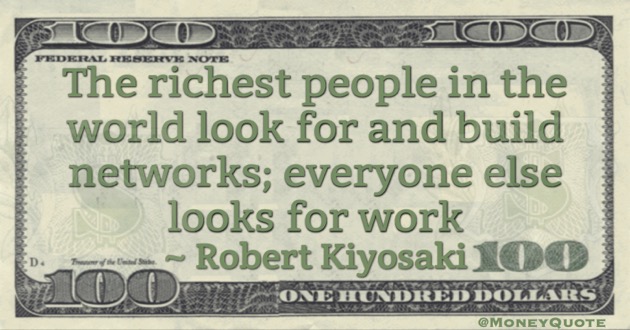 “The richest people in the world look for and build networks; everyone else looks for work” — Robert Kiyosaki

Today, the richest 400 Americans own over $2.2 trillion in wealth, more than the bottom 150 million Americans combined
— Bernie Sanders

The scale of global inequality is quite simply staggering and despite the issues shooting up the global agenda, the gap between the richest and the rest is widening fast
— Winnie Byanyima

Donald Trump @RealDonaldTrump Money Quotation saying his presidential campaign is (maybe) the wealthiest of any in history. Donald Trump said:

We have by far the richest campaign maybe ever launched. I have more money than anybody who ever did this
— Donald Trump

Socrates Money Quotation saying those with least desires for more than they possess are the happiest and most satisfied. Socrates said: