Earl Wilson Money Quote saying Our creditors are more concerned about our well-being than friends and relatives, so there’s that debt thing. Earl Wilson said: 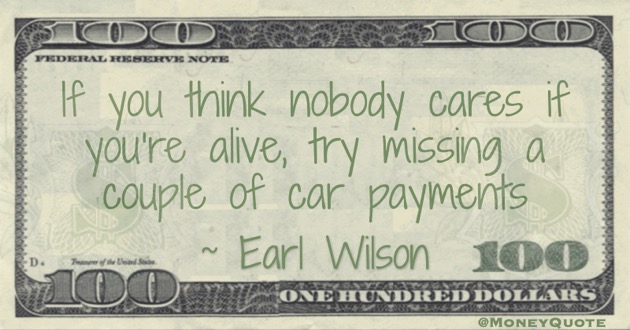 “If you think nobody cares if you’re alive, try missing a couple of car payments” — Earl Wilson

Share the Earl Wilson Money quote image above on your site:

The plan we heard today does not comply with the law. And these emoluments, these payments from foreign governments, have to be out of the Trump business empire on Jan. 20 or he will be in violation of the law
— Richard Painter

Sheri Dillon Money Quote saying as conflict of interest attorney for Donald Trump that any profit from foreign government payments made to his hotels would be donated to the U.S Treasury. Sheri Dillon said:

President-elect Trump [will] voluntarily donate all profits from foreign government payments made to his hotels to the United States Treasury. This way it is the American people who will profit
— Sheri Dillon

Marcus Treacher Money Quote saying as head of strategic accounts at Ripple that banks are old and slow to change, holding back advancements from startup fintech companies. Marcus Treacher said:

The payments industry is revving up, but it is stuck in second gear because it is being held back by the antiquated banking system
— Marcus Treacher

Susan Crawford Money Quotation is imagining new options of transactions like cell phones, making the idea of our existing system of payments seem like a daydream. Susan Crawford said:

There is nothing more imaginary than a monetary system. The idea that we solemnly hand around printed slips of paper in exchange for food and water shows just how trusting and fond of patterned behavior we human beings are
— Susan Crawford