“We will have to want peace, want it enough to pay for it, pay for it in our own behavior and in material ways” — Eleanor Roosevelt

Share the Eleanor Roosevelt Money quote image above on your site: “We are being made aware that the organization of society on the principle of private profit, as well as public destruction, is leading both to the deformation of humanity by unregulated industrialism, and to the exhaustion of natural resources, and that a good deal of our material progress is a progress for which succeeding generations may have to pay dearly” — T.S. Eliot

Share the T.S. Eliot Money quote image above on your site:

Jean Vanier Money Quote saying when people in a community know each other well, they don’t need financial wealth to be happy in that community. Jean Vanier said: “When people love each other, they are content with very little. When we have light and joy in our hearts, we don’t need material wealth. The most loving communities are often the poorest” — Jean Vanier

Share the Jean Vanier Money quote image above on your site: 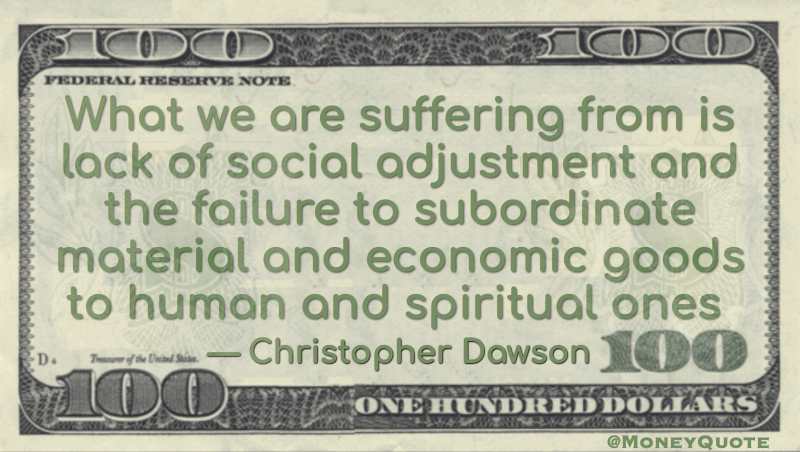 Below are comments made by Paper Collage Artist Mark Wagner about his money collage art, work that makes us look more closely at currency. The video directly below has none of the quotes, but features Wagner talking to CBS Sunday Morning about his art. The quotes come from the second video on the page below from Avant Garde Diaries, titled “Money is Material”:

“The object in question is essentially just a piece of paper. Money and currency don’t actually exist in the real world, they’re just something that we’ve made up”

“Sometimes I stop thinking of it as a dollar bill, I just think about it as materials. I have to remind myself sometimes that it’s worth money”

Oprah Winfrey on What Really Matters

If money and material things become the center of our lives, they seize us and make us slaves

Ayn Rand Money Quotation saying symbolism and trust must be placed in a standard agreed upon by the parties involved in transactions based on expectations of equity. Ayn Rand said: