You may not be able to buy love with money, but if you spend your love, you may end up with a lot of money
– Debasish Mridha

Dylan Moran Money Quote saying we all understand the futility of buying love but don’t overlook the really good food that you most certainly can buy with it. Dylan Moran said: 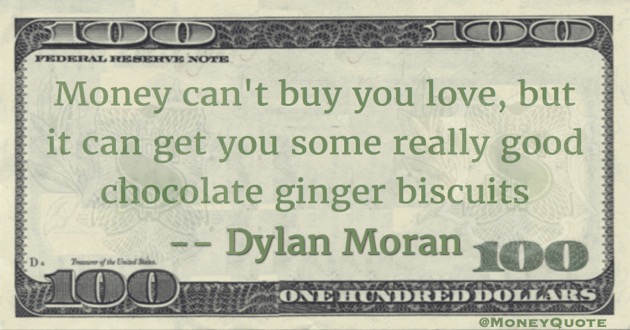 “Money can’t buy you love, but it can get you some really good chocolate ginger biscuits” — Dylan Moran

Share the Dylan Moran Money quote image above on your site:

The Beatles Money Quote saying in the title line from their 1964 hit song that love can’t be bought, so why care about money. The Beatles said: 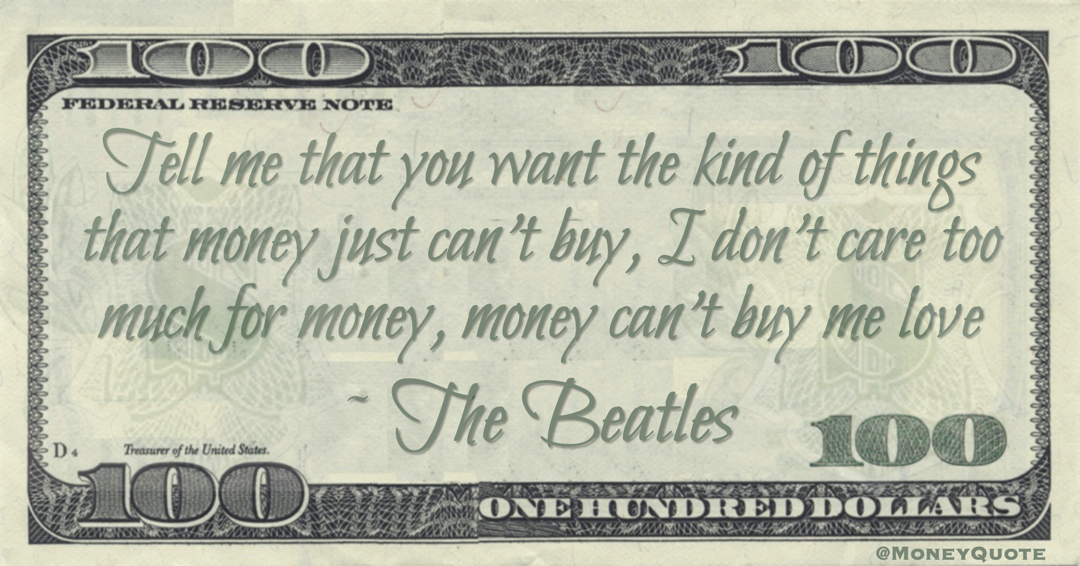 “Tell me that you want the kind of things that money just can’t buy, I don’t care too much for money, money can’t buy me love” — The Beatles

Share the The Beatles Money quote image above on your site:

Melchor Lim: Love is All You Need

Melchor Lim Money Quote saying love is the only thing required to get along with no need for any type of wealth or trappings of power. Melchor Lim said:

You don’t need money or power or any other advantage to get by in this world; love is all you need
— Melchor Lim

Cesare Pavese: In Love With Millionaire

Cesare Pavese Money Quote saying a woman is wise to marry a rich man, but smart enough to fall in love with him before marriage. Cesare Pavese said:

No woman marries for money; they are all clever enough, before marrying a millionaire, to fall in love with him first
— Cesare Pavese

Hedy Lamarr Money Quote saying love is top priority for some and money comes first for others – which are camp are you in? Hedy Lamarr said: 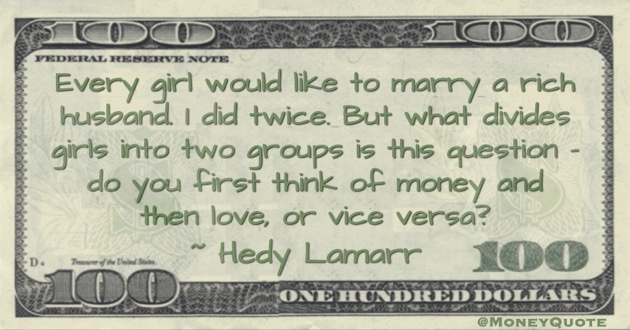 “Every girl would like to marry a rich husband. I did twice. But what divides girls into two groups is this question – do you first think of money and then love, or vice versa?” — Hedy Lamarr

Share the Hedy Lamarr Money quote image above on your site:

It is not the creation of wealth that is wrong, but the love of money for its own sake
— Margaret Thatcher

Ronaldo: Distinguish Those Who Love Me

Cristiano Ronaldo Money Quote saying he can tell the difference between fawning and true love & devotion of people close to him. Ronaldo said: