J.S.G. Boggs: Dollar is All Act of Faith

J.S.G. Boggs Money Quote saying we put great faith in our currency, but few understand that it only works because of the value we assign it and our trust that others have similar beliefs. J.S.G. Boggs said: 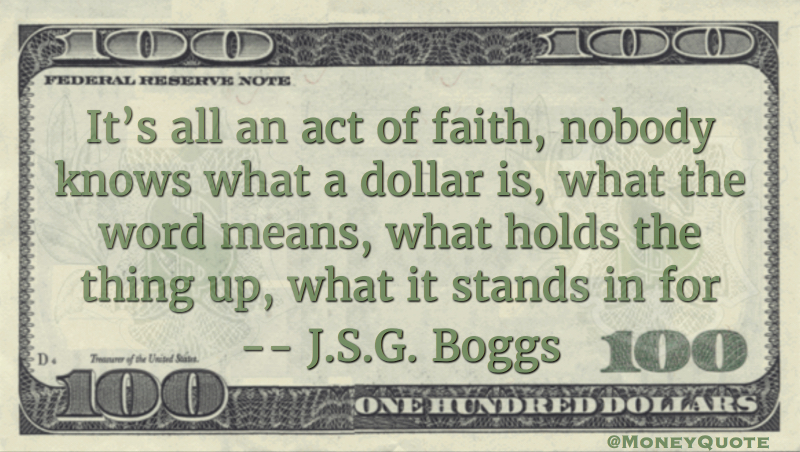 “It’s all an act of faith, nobody knows what a dollar is, what the word means, what holds the thing up, what it stands in for” — J.S.G. Boggs

and he continues “And that’s what my work is about” as an artist who explores the meaning of money in his work. Boggs died in 2016 with far less recognition than he deserved. Visit the related quotes from Boggs shown below for more on a great artist.

Share the J.S.G. Boggs Money quote image above on your site:

J.S.G. Boggs: All Money is Art

All money is art, If you look at a dollar, it’s portraiture, it’s landscape art, it’s abstract designs
— J.S.G. Boggs

J.S.G. Boggs Money Quotation saying currency is art, as well as a representation of value which is universally accepted as a medium of exchange. J.S.G. Boggs said:

J.S.G. Boggs: What is Money Really?

J.S.G. Boggs Money Quotation saying he would like those who view his art work to look beyond basic assumptions and ask what is cash? J.S.G. Boggs said:

Most people make this mistake that my work is predominantly about money. And it’s really not… I want them to ask, ‘What is money, really?’
— J.S.G. Boggs

The image of money is a powerful, expressive symbol, of significant value” in the communication of ideas. Id. “It is, to state the obvious, a particularly effective symbol for the communication of ideas about money itself.” Id. It is clear that plaintiff uses his illustrations of money to illustrate and question “the meaning and uses of art and money in everyday life.” Boggs’ Aff. 7. Boggs’ use of illustrations of money are “intimately related to the expression and communication of [his] ideas.” Time, Inc. v. Regan, 539 F. Supp. at 1383. The publication or printing of illustrations of United States currency is protected speech under the First Amendment of the Constitution. Therefore, Mr. Boggs has a First Amendment right to create illustrations of United States currency absent constitutionally permissible overriding considerations.
Boggs v. Bowron, U.S. District Court, Washington D.C. Decided November 6, 1998 No. 97-5313

JSG Boggs: Abstractions – Something or Not

When you are dealing with an abstraction, the borderline between something and nothing is very subtle