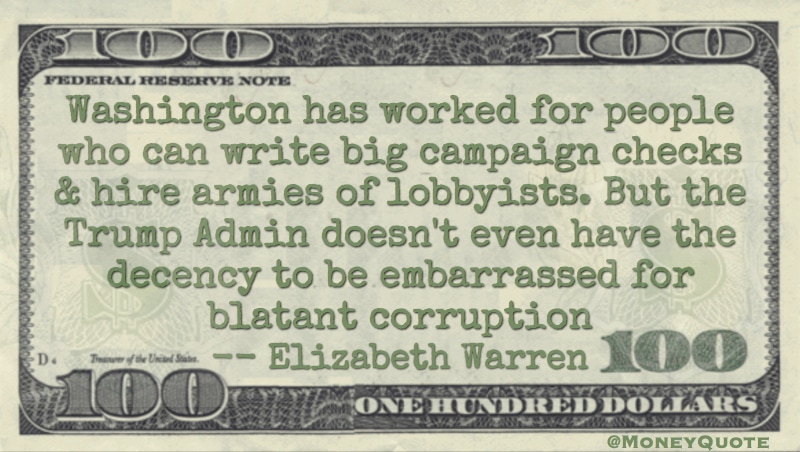 “Washington has worked for people who can write big campaign checks & hire armies of lobbyists. But the Trump Admin doesn’t even have the decency to be embarrassed for blatant corruption” — Elizabeth Warren

Share the Elizabeth Warren Money-in-Politics quote image above on your site:

For a long time, Washington has worked for people who can write big campaign checks & hire armies of lobbyists. But the Trump Admin doesn't even have the decency to be embarrassed for blatant corruption. The American people deserve better– we won't stop fighting until we get it. pic.twitter.com/FDRKUIRYC4

Donald Trump Money Quote referencing the healthcare.gov website saying he could have gotten a better deal because his websites cost him less than anyone, possibly ever in the history of websites. Donald Trump said:

And remember the $5 billion website? $5 billion we spent on a website, and to this day it doesn’t work. A $5 billion dollar website? I have so many websites. I have them all over the place. I hire people, they do a website. It costs me $3 dollars
— Donald Trump

If you don’t build your dream someone will hire you to help build theirs
— Tony A. Gaskins Jr.

Simon Sinek Money Quote saying those who truly believe in your mission will pour their soul into the work and not simply earn their pay. Simon Sinek said:

Do not hire a man who does your work for money, but him who does it for love of it
— Henry David Thoreau