Dennis Prager Money Quote saying those who are poor and have not been rich, fantasize that having money will make them happy, while those who’ve been wealthy know it doesn’t deliver happiness. Dennis Prager said:

Unhappy poor people at least have the fantasy that money will make them happy; unhappy rich people don’t even have that
— Dennis Prager

Seneca Money Quote saying it’s possible to be happy without riches, even when possessed and lost – because wisdom values the moment. Seneca said:

Riches are slaves in the house of a wise man, but masters in that of a fool. […] If one takes away riches from the wise man, one leaves him still in possession of all that is his: for he lives happy in the present, and without fear for the future
— Seneca

Albert Camus Money Quotation saying to reach the end goal of being happy, we focus on the struggle to earn for that happiness instead. Albert Camus said: 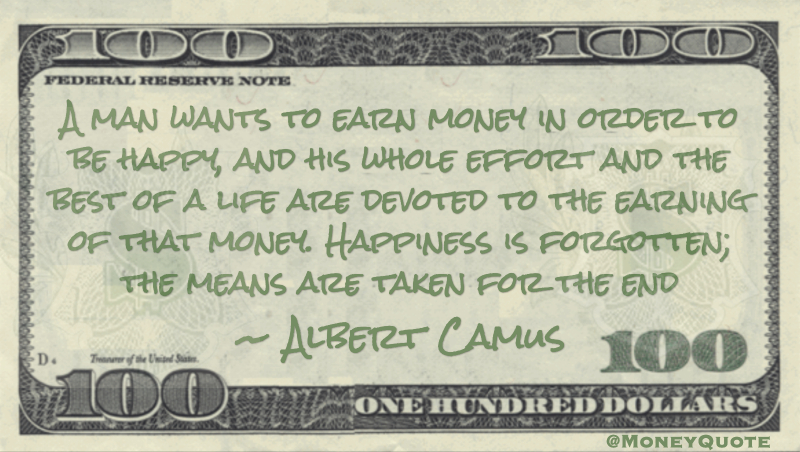 “A man wants to earn money in order to be happy, and his whole effort and the best of a life are devoted to the earning of that money. Happiness is forgotten; the means are taken for the end” — Albert Camus

Share the Albert Camus Money quote image above on your site:

Albert Camus: Everything Can Be Bought

Posted by admin on Wednesday, September 2, 2015

Miley Cyrus Money Quotation saying having virtually everything that matters to you and reaching every possible goal won’t make you happy. Miley Cyrus said:

Getting more money, having more hits, being the lead in the movie — those things might stimulate you, but they don’t make you happy. I’ve experienced it all already, and I’m telling you firsthand, it doesn’t
— Miley Cyrus

Ani Difranco Money Quotation saying those who find love lacking money will be happy with that love but unhappy otherwise. Ani Difranco said: 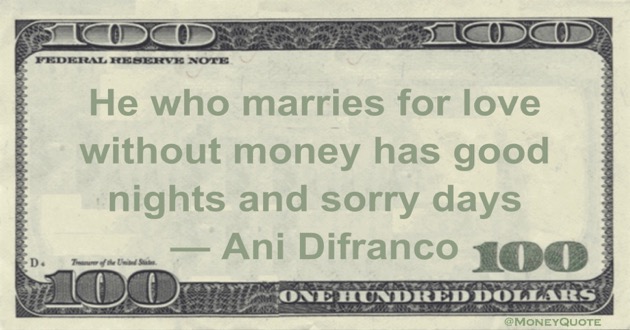 Share the Ani Difranco Money quote image above on your site:

Money is numbers and numbers never end. If it takes money to be happy, your search for happiness will never end
— Bob Marley