Jean Anouilh Money Quotation saying those who win wars with large troops and lots of cash will claim that God was on their side. Jean Anouilh said:

God is on everyone’s side – and in the last analysis, he is on the side with plenty of money and large armies
— Jean Anouilh

Leaders don’t pray to God for money. They simply ask for His grace to solve problems. By solving problems, the money comes
— Israelmore Ayivor

Bernie Sanders Money Quotation saying he agrees with Pope Francis that there are many more important things in life than the almighty dollar. Bernie Sanders said:

Money cannot be the God of life

"Money cannot be the God of life," – Bernie Sanders on Pope Francis and income inequality https://t.co/B2F5EPLeyn 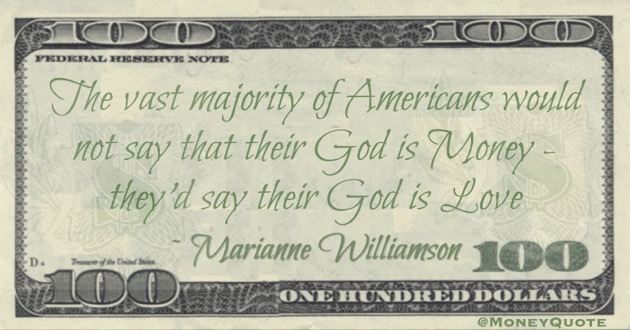 Share the Marianne Williamson Money quote image above on your site:

"The vast majority of Americans would not say that their God is Money – they'd say their God is Love." – @marwilliamson #RealTime

Oscar Wilde Money Quotation saying almost angrily that we revere wealth above all and that success comes to those most worshipful of riches. Oscar Wilde said:

Heinrich Heine Money Quotation saying that God was fallible in his planning for sufficient funds for everyone. Heinrich Heine said: