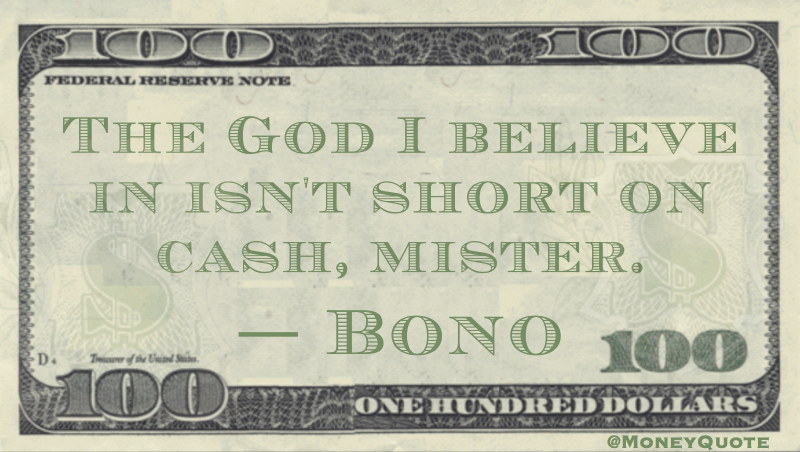 “The God I believe in isn’t short of cash, mister” — Bono

Share the Bono Money quote image above on your site:

George Orwell: Money What God Used to Be

Money is what God used to be. Good and evil have no meaning any longer except failure and success. Hence the profoundly significant phrase, to make good
— George Orwell

H.W. Charles Money Quote saying proving that what we focus on grows, jews are taught that wealth is a gift and are real spiritual rewards from god. H.W. Charles said:

While many ethnic and religious groups are mainly focused on the afterlife and downplaying this world, Jews view wealth and success as a blessing and
gift from God
— H.W. Charles

Dan Millman Money Quote saying money is a mysterious substance which causes us to be more of who we already are. Dan Millman said:

Money is neither my god nor my devil. It is a form of energy that tends to make us more of who we already are, whether it’s greedy or loving
— Dan Millman

Matthew 6:24 Money Quote saying we can’t be fully involved in both money-making and fully serve god – we must choose one lifestyle to love. Matthew 6:24 said:

No one can serve two masters. Either he will hate the one and love the other, or he will be devoted to the one and despise the other. You cannot serve both God and Money
— Matthew 6:24

When God gives any man wealth and possessions, and enables him to enjoy them, to accept his lot and be happy in his work – this is a gift of God
— Ecclesiastes 5:19

Mammon, n.: The god of the world’s leading religion