Northrop Frye Money Quote saying Canadian accountants are revered more in their country than rich Americans that like to make money are in theirs. Northrop Frye said: 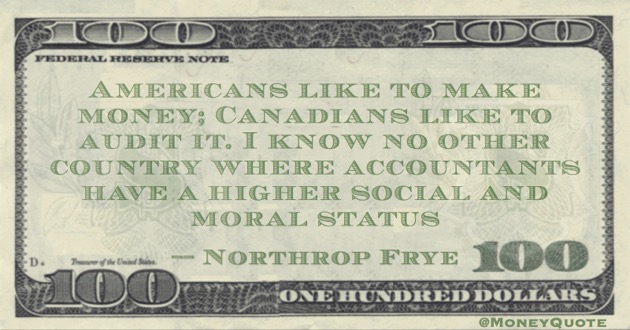 “Americans like to make money; Canadians like to audit it. I know no other country where accountants have a higher social and moral status” — Northrop Frye

Share the Northrup Frye Money quote image above on your site:

For me, you’ve got to play football first. We’re not trying to be accountants. The money takes care of itself
— Shaun Alexander

Funny Money Quotes: The ex-president and his wealthy friends hire uniquely talented accountants for reasons that are different from the little people – perhaps Americans should return the favor. George W. Bush said:

Tony Bennett Money Quotation aims scorn at the business side of music making required to make money while siding with the music makers.

Producers, engineers, lawyers and accountants all make money, but the artists don’t