“We should only sell arms to those we absolutely trust. At this point in time, we can’t trust Saudi Arabia. It’s now time to suspend arms sales.” — Rand Paul

Share the Rand Paul Money quote image above on your site: 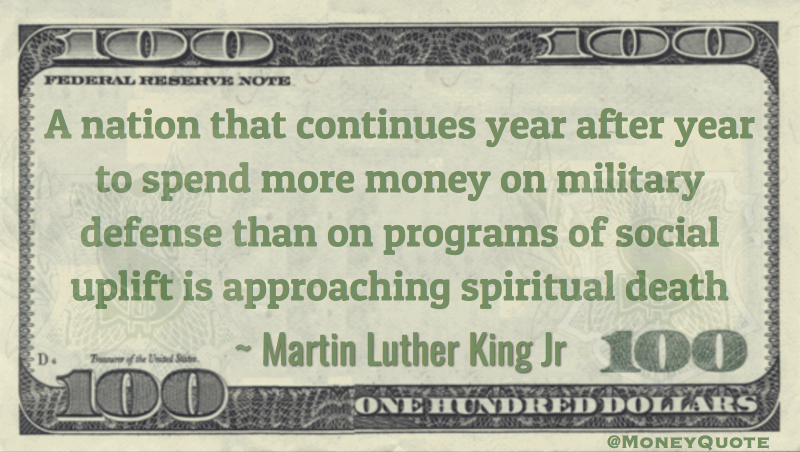 “A nation that continues year after year to spend more money on military defense than on programs of social uplift is approaching spiritual death” — Martin Luther King Jr.

This kind of gap between the wealthiest and the poorest will get closed. History shows it usually ends in one of three ways — either higher taxes, revolution, or war. None of those are on my bucket list. — Paul Tudor Jones

War begun without good provision of money beforehand for going through with it is but as a breathing of strength and blast that will quickly pass away.
Coin is the sinews of war
— Francois Rabelais War is a Racket. It always has been. It is possibly the oldest, easily the most profitable, surely the most vicious. It is the only one international in scope. It is the only one in which the profits are reckoned in dollars and the losses in lives. It has been estimated by statisticians and economists that the war yielded $16 Trillion in Profits That is how the 21,000 Billionaires and millionaires got that way. This $16 Trillion in Profits is not to be sneezed at. It is quite a tidy sum. Smedley D Butler 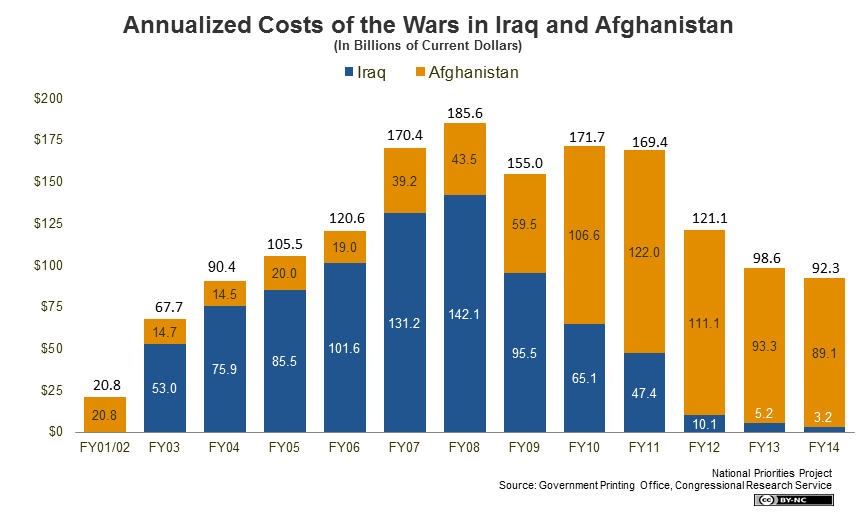 For I can raise no money by vile means. By heaven, I had rather coin my heart, And drop my blood for drachmas
– William Shakespeare (Brutus to Cassius on funding war in Julius Ceasar, Act 4, Scene 3)

Weapons are like money; no one knows the meaning of enough

“Every gun that is made, every warship launched, every rocket fired signifies, in the final sense, a theft from those who hunger and are not fed, those who are cold and are not clothed. This world in arms is not spending money alone. It is spending the sweat of its laborers, the genius of its scientists, the hopes of its children. The cost of one modern heavy bomber is this; a modern brick school in more than 30 cities; it is two electric power plants, each serving a town of 60,000 population; it is two fine, fully equipped hospitals; it is some 50 miles of concrete pavement. We pay for a single fighter plane with a a half million bushels of wheat. We pay for a single destroyer with new homes that could have housed more than 8,000 people. This is, I repeat the best way of life to be found on the road the world has been taking. This is not a way of life at all in any true sense. Under the cloud of threatening war, it is humanity hanging from a cross of iron.” Dwight D. Eisenhower, From a speech before the American Society of Newspaper Editors, April 16, 1953 “You know, we live in a country where if you want to go bomb somebody, there’s remarkably little discussion about how much it might cost, even though the costs almost inevitably end up being orders of magnitude larger than anybody projected at the outcome. But when you have a discussion about whether or not we can assist people who are suffering, then suddenly we come very, you know, cost-conscious.” — Andrew Bacevich

Share the Andrew Bacevich War Money quote image above on your site:

“We will bankrupt ourselves in the vain search for absolute security.” — Dwight D. Eisenhower

“A cure for War? Furiously spending the same daily amount of money toward making friends. Being an indispensable source of food, shelter, peace, and cultural support dedicatedly spending 9 billion dollars a month on helping people would be a formidable enemy of evil.” Vanna Bonta

“The attainment of the economic aims of man presupposes peace.” — Ludwig von Mises “They got money for wars, but can’t feed the poor” — Tupac Shakur

Share the Tupac Shakur Money quote image above on your site: “To wage war, you need first of all money; second, you need money, and third, you also need money” — Raimondo Montecuccoli

Share the Raimondo Montecuccoli Money quote image above on your site: “On September 14, 2001, I placed the lone vote against the ‘Authorization for Use of Military Force’ – an authorization that I knew would provide a blank check to wage war anywhere, at any time, and for any length” — Barbara Lee

Share the Barbara Lee Money quote image above on your site:

“War prosperity is like the prosperity that an earthquake or a plague brings.” — Ludwig von Mises

“War can really cause no economic boom, at least not directly, since an increase in wealth never does result from destruction of goods.” — Ludwig von Mises

“The de facto role of the US armed forces will be to keep the world safe for our economy and open to our cultural assault.” — Major Ralph Peters

“The sinews of war are infinite money.” — Marcus Tullius Cicero “I guess if people couldn’t profit from war I don’t think there would be war. But there are too many people that make so much money at the cost of lives of other humans and for no reason but to make the money” — Lily Tomlin

The essence of so-called war prosperity; it enriches some by what it takes from others. It is not rising wealth but a shifting of wealth and income.” — Ludwig von Mises

History has witnessed the failure of many endeavors to impose peace by war, cooperation by coercion, unanimity by slaughtering dissidents…. A lasting order cannot be established by bayonets.” — Ludwig von Mises

“That there are men in all countries who get their living by war, and by keeping up the quarrels of Nations is as shocking as it is true…” — Thomas Paine

“When the rich make war, it’s the poor that die” – Jean-Paul Sartre

“It is unfortunately none too well understood that, just as the State has no money of its own, so it has no power of its own.” — Albert J. Nock

“Any city however small, is in fact divided into two, one the city of the poor, the other of the rich. These are at war with one another” — Plato

“There was never a war on poverty. Maybe there was a skirmish on poverty” — Andrew Cuomo

“The present assault upon capital is but the beginning. It will be but the stepping-stone to others, larger and more sweeping, till our political contests will become a war of the poor against the rich; a war growing in intensity and bitterness.” — Justice Stephen J. Field

“War involves in its progress such a train of unforeseen and unsupposed circumstances that no human wisdom can calculate the end. It has but one thing certain, and that is to increase taxes.” — Thomas Paine

All wars are fought for money

“Nations have recently been led to borrow billions for war; no nation has ever borrowed largely for education… no nation is rich enough to pay for both war and civilization. We must make our choice; we cannot have both.” — Abraham Flexner

“Buy when the cannons are firing, and sell when the trumpets are blowing” — Nathan Rothschild

“If we desire to avoid insult, we must be able to repel it; if we desire to secure peace, one of the most powerful instruments of our rising prosperity, it must be known, that we are at all times ready for War.” — George Washington, fifth annual address to Congress, Dec. 13, 1793

“History teaches that war begins when governments believe the price of aggression is cheap.” — Ronald Reagan

“There would be an end of war and preparations for war if the cost were borne by those responsible for war. There would be an end of armaments and preparedness if incomes and inheritances and the landed estates of the feudal classes paid for the protection which their privileges enjoy. War and preparations for war are possible only because the ruling classes are able to shift a great part of the cost onto the poor by indirect taxation and loans. War expenditures are tolerated only because the burdens are concealed in the increased cost of the things people consume. ‘The art of plucking the goose without making it cry out’ has been developed to a high state of perfection at the hands of the war makers.” — Frederic Clemson Howe in Why War

Make wars unprofitable and you make them impossible

“For most of history, war has been a more or less functional institution, providing benefits for those societies that were good at it, although the cost in money, in lives, and in suffering was always significant. Only in the past century have large numbers of people begun to question the basic assumption of civilized societies that war is inevitable and often useful.” — Gwynne Dyer, War: The Lethal Custom

“With this loss of substance and exhaustion of strength, the homes of the people will be stripped bare, and three-tenths of their income will be dissipated; while government expenses for broken chariots, worn-out horses, breast-plates and helmets, bows and arrows, spears and shields, protective mantles, draught-oxen and heavy wagons, will amount to four-tenths of its total revenue. He who wishes to fight must first count the cost. When you engage in actual fighting, if victory is long in coming, then men’s weapons will grow dull and their ardor will be dampened. If you lay siege to a town, you will exhaust your strength. Again, if the campaign is protracted, the resources of the State will not be equal to the strain. Now, when your weapons are dulled, your ardor dampened, your strength exhausted and your treasure spent, other chieftains will spring up to take advantage of your extremity. Then no man, however wise, will be able to avert the consequences that must ensue… In war, then, let your great object be victory, not lengthy campaigns.” —Sun Tzu, the Art of War

“Peace, which costs nothing, is attended with infinitely more advantage than any victory with all its expence.” — Thomas Paine

“Terrorism is the war of the poor, and war is the terrorism of the rich.” — Sir Peter Ustinov

“War is never economically beneficial except for those in position to profit from war expenditures.” — Congressman Ron Paul

Wars are not paid for in wartime, the bill comes later

“All wars are follies, very expensive and very mischievous ones.” — Benjamin Franklin

“Probably, no nation is rich enough to pay for both war and civilization. We must make our choice; we cannot have both.” — Abraham Flexner

“War-making is one of the few activities that people are not supposed to view ‘realistically’; that is, with an eye to expense and practical outcome. In all-out war, expenditure is all-out, unprudent—war being defined as an emergency in which no sacrifice is excessive.” — Susan Sontag

“Victory was never in doubt. Its cost was.” — Major General Graves B. Erskine

“The moral and constitutional obligations of our representatives in Washington are to protect our liberty, not coddle the world, precipitating no-win wars, while bringing bankruptcy and economic turmoil to our people.” — Ron Paul

“Boys are the cash of war. Whoever said: we’re not free spenders- doesn’t know our like.” — John Ciardi

The most successful war seldom pays for its losses

“When after many battles past,
Both tir’d with blows,
make peace at last,
What is it, after all, the people get?
Why! taxes, widows, wooden legs, and debt.”
— Francis Moore