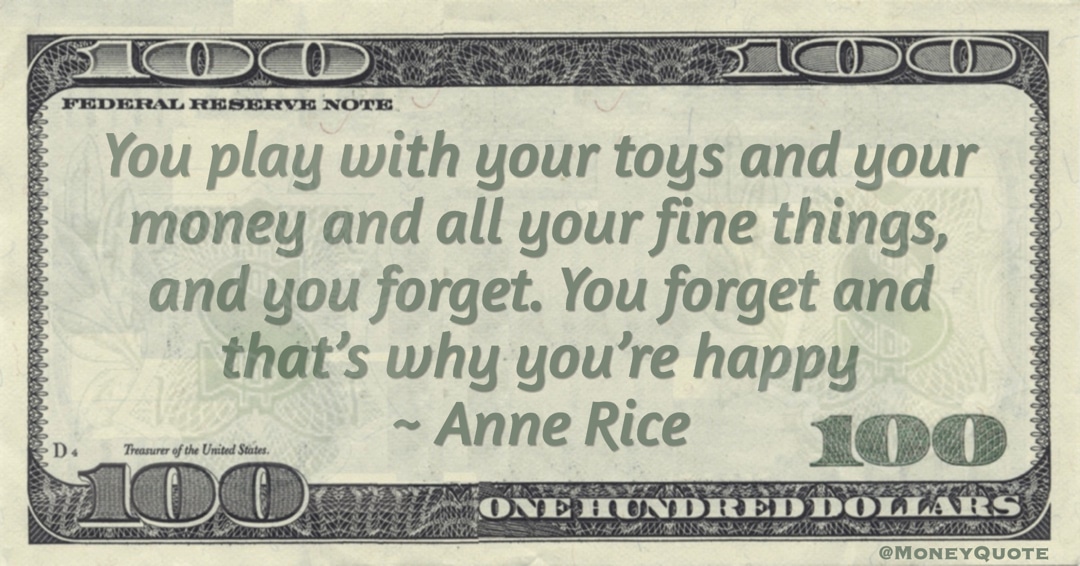 “You play with your toys and your money and all your fine things, and you forget. You forget and that’s why you’re happy” — Anne Rice 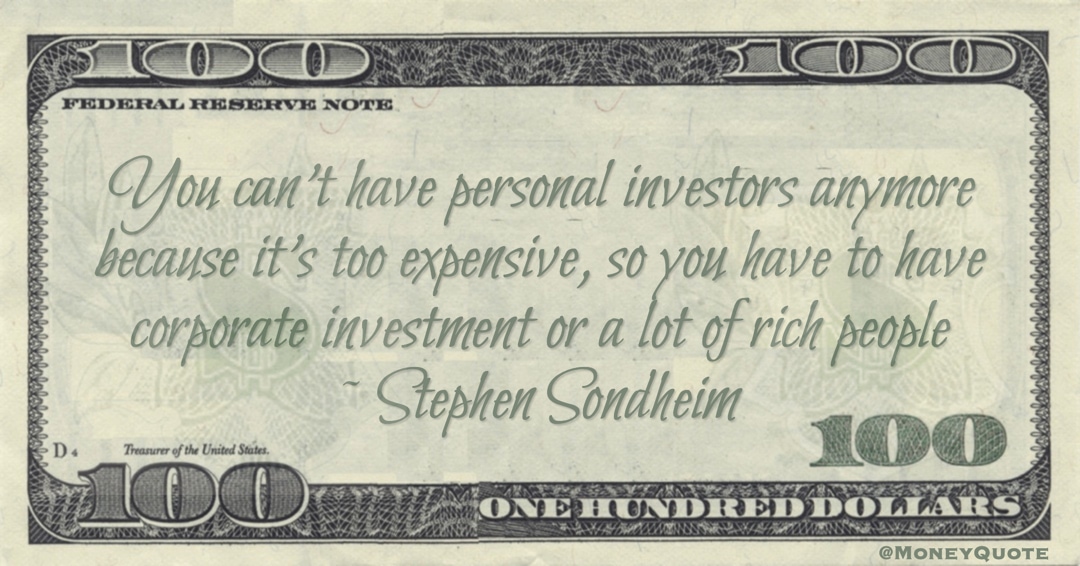 “You can’t have personal investors anymore because it’s too expensive, so you have to have corporate investment or a lot of rich people” — Stephen Sondheim 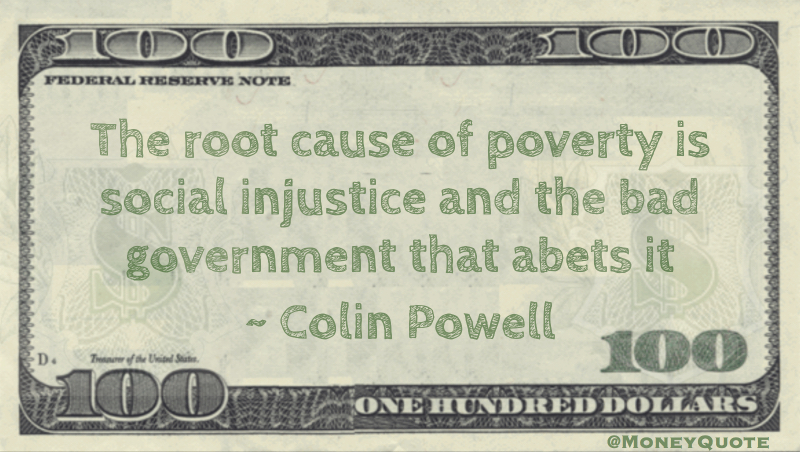 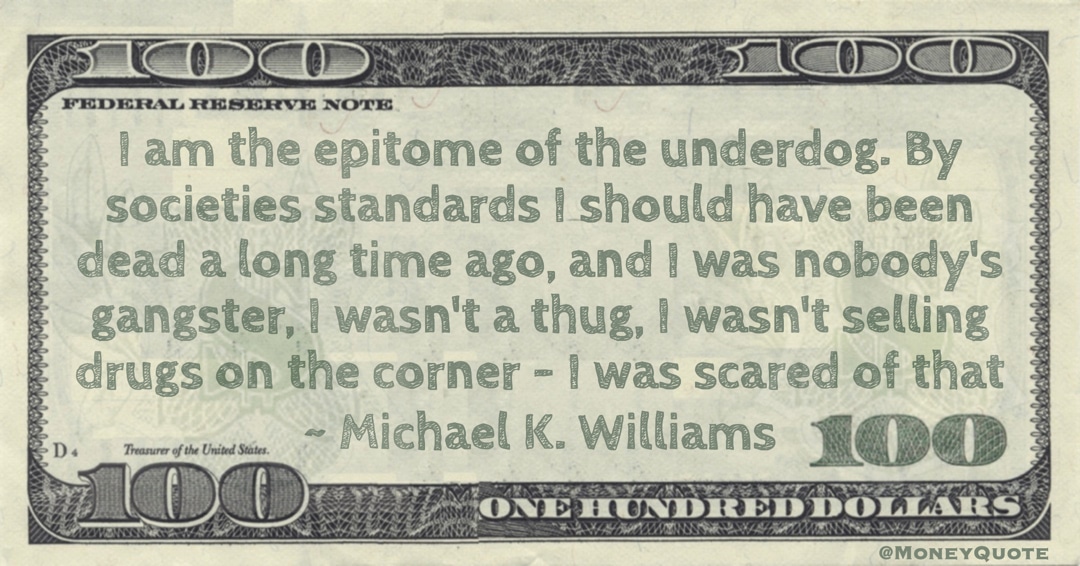 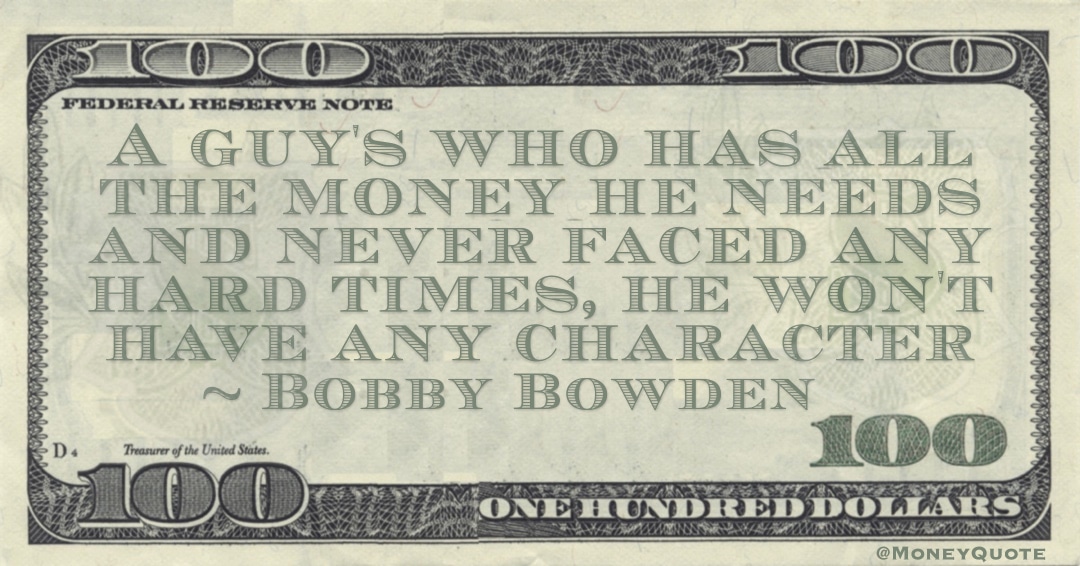 “A guy’s who has all the money he needs and never faced any hard times, he won’t have any character” — Bobby Bowden 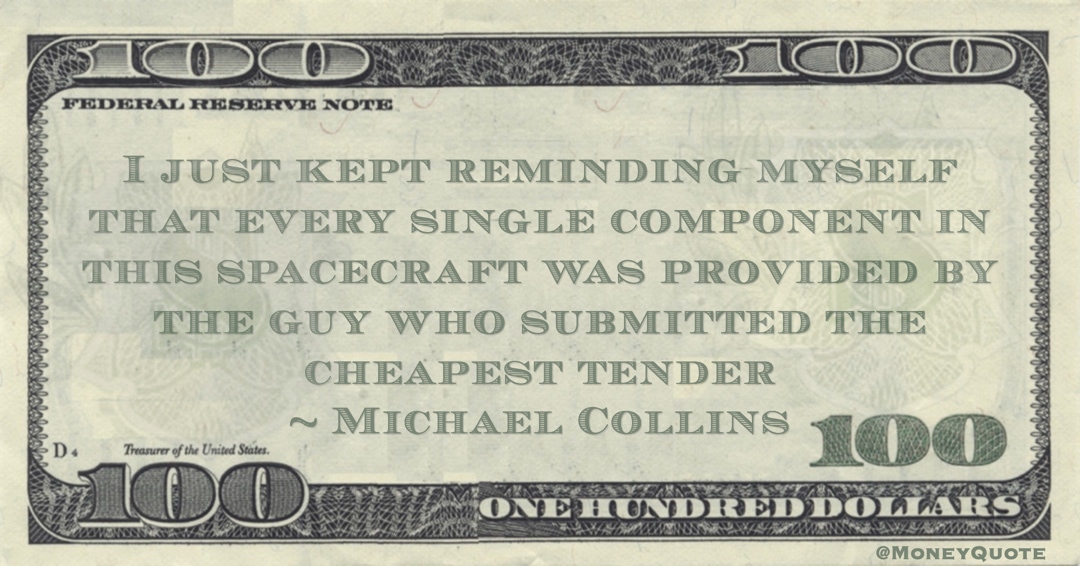 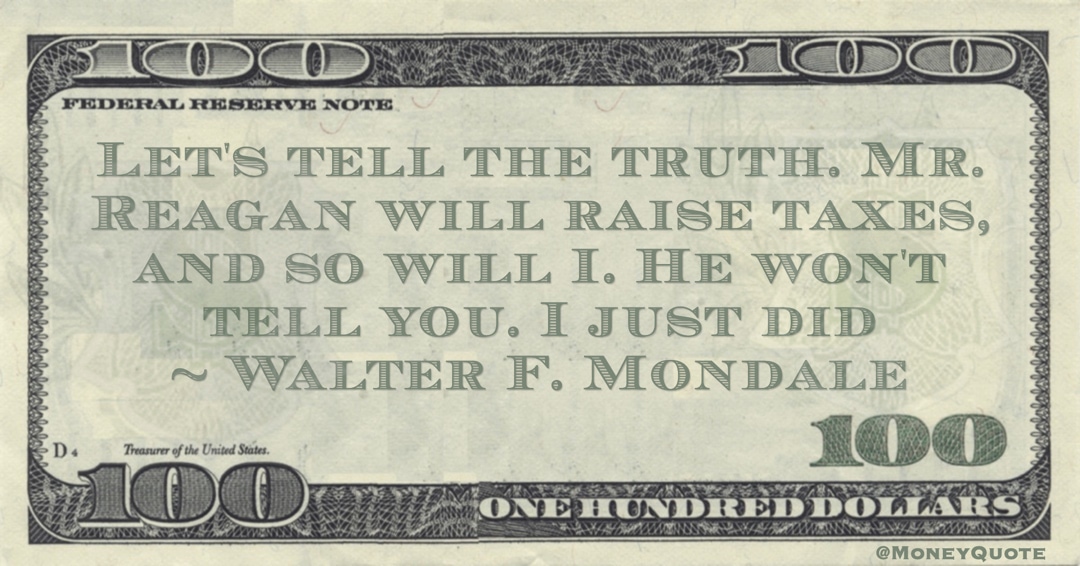 “Let’s tell the truth. Mr. Reagan will raise taxes, and so will I. He won’t tell you. I just did” — Walter F. Mondale 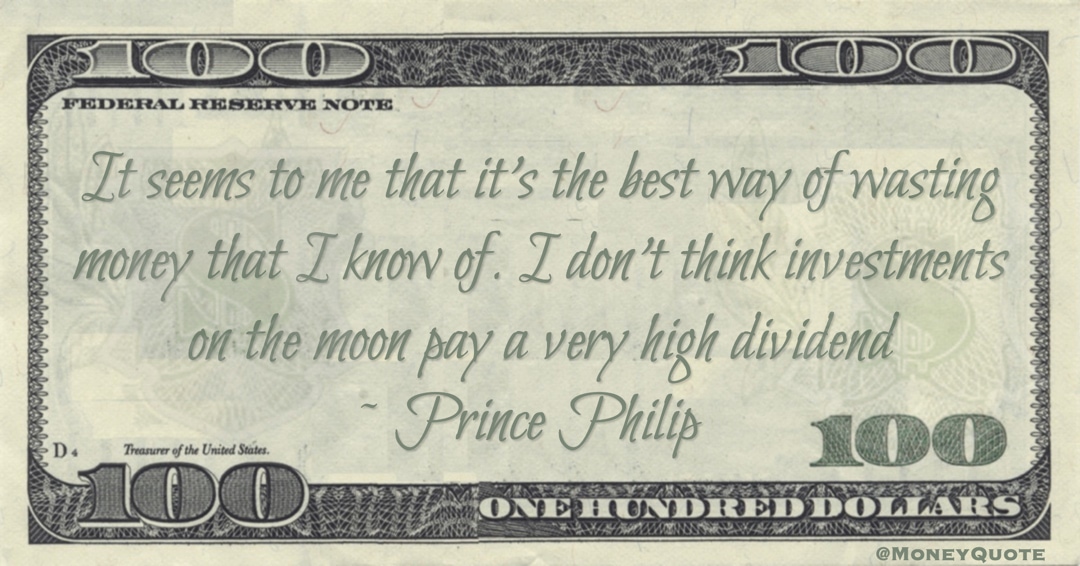 “It seems to me that it’s the best way of wasting money that I know of. I don’t think investments on the moon pay a very high dividend” — Prince Philip 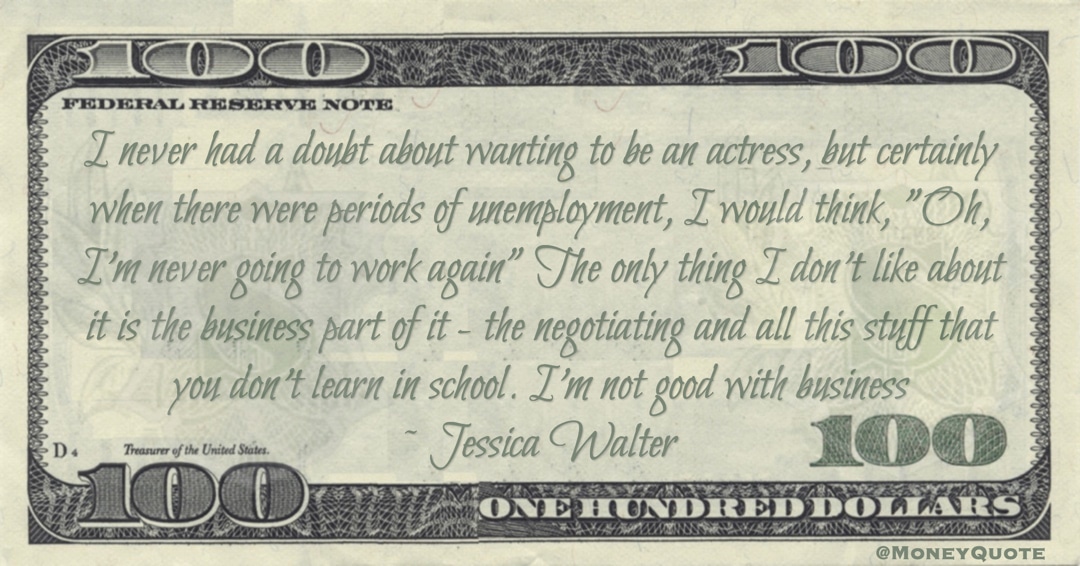 “I never had a doubt about wanting to be an actress, but certainly when there were periods of unemployment, I would think, ‘Oh, I’m never going to work again’ The only thing I don’t like about it is the business part of it – the negotiating and all this stuff that you don’t learn in school. I’m not good with business” — Jessica Walter 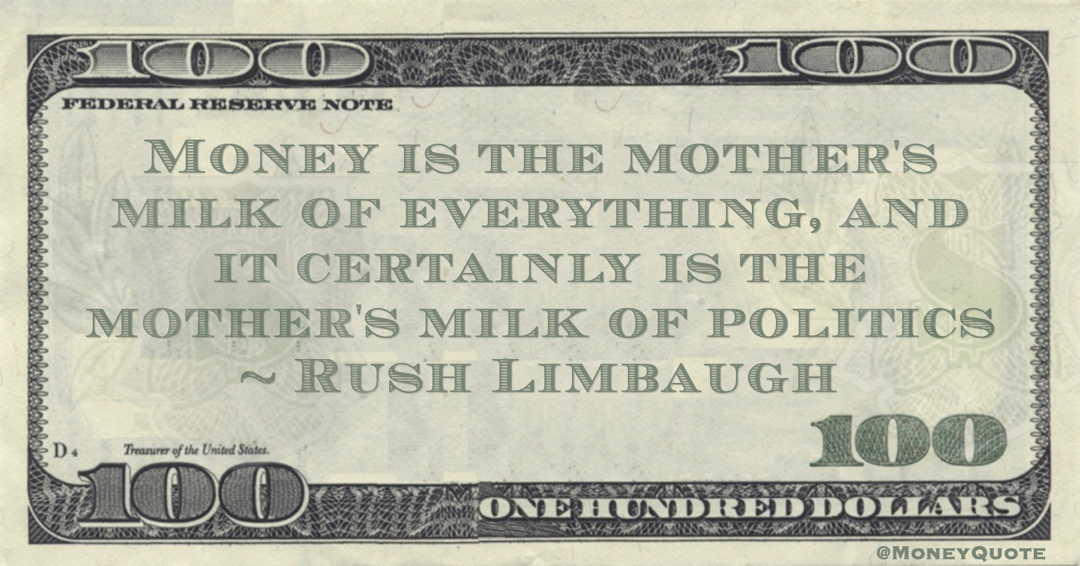 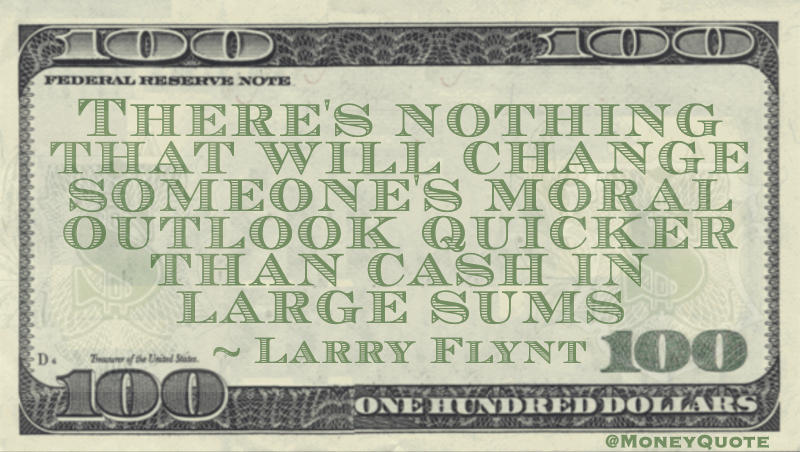 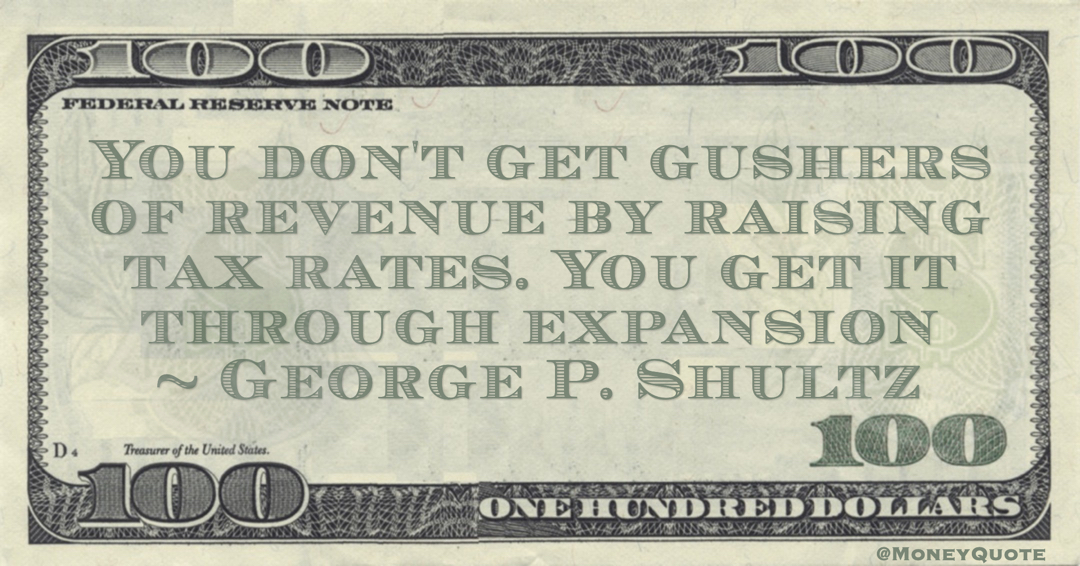 “You don’t get gushers of revenue by raising tax rates. You get it through expansion” — George P. Shultz 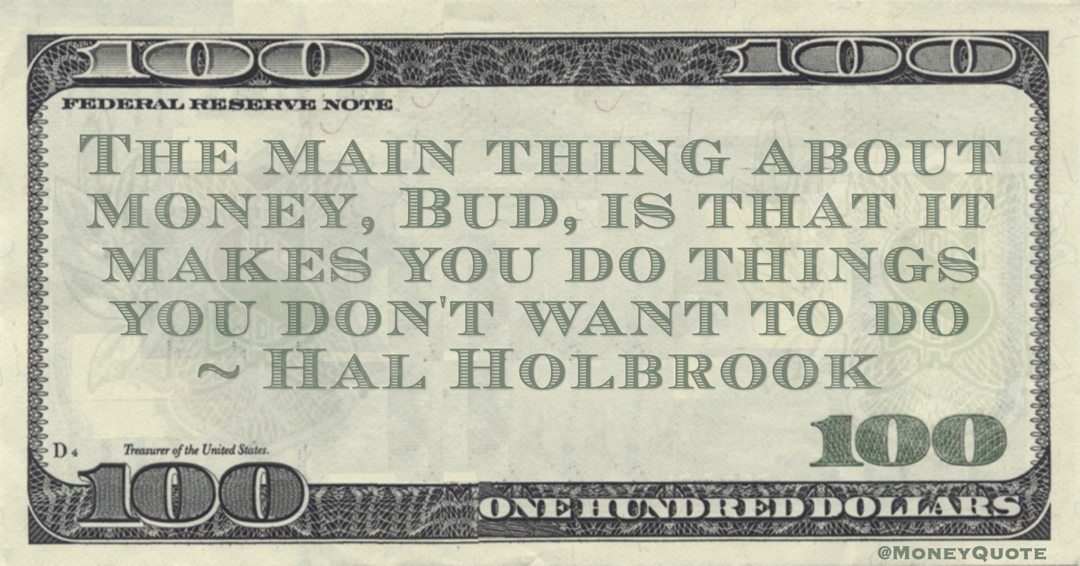 “The main thing about money, Bud, is that it makes you do things you don’t want to do” — Hal Holbrook 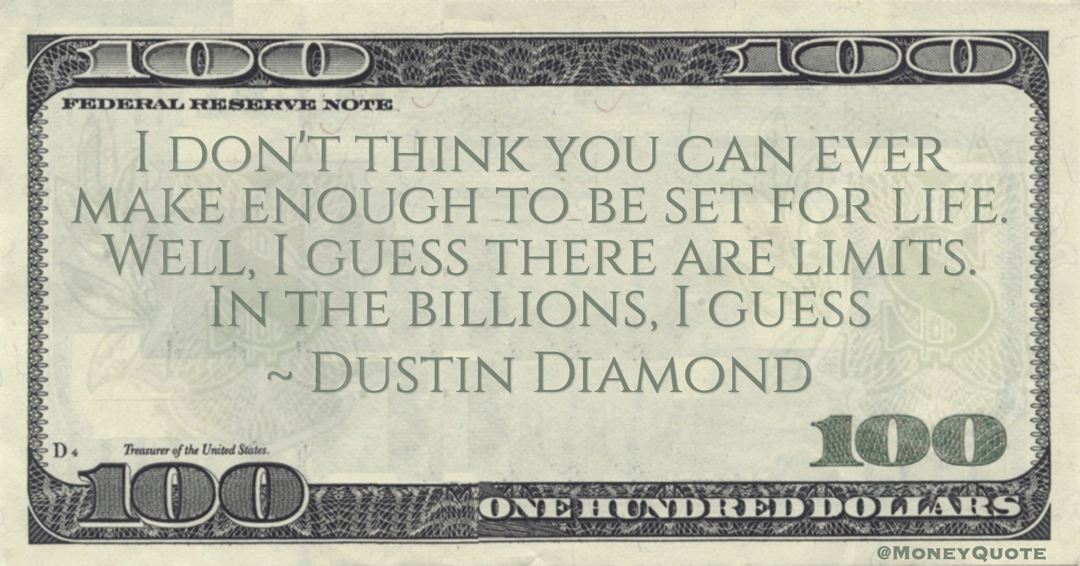 “I don’t think you can ever make enough to be set for life. Well, I guess there are limits. In the billions, I guess” — Dustin Diamond 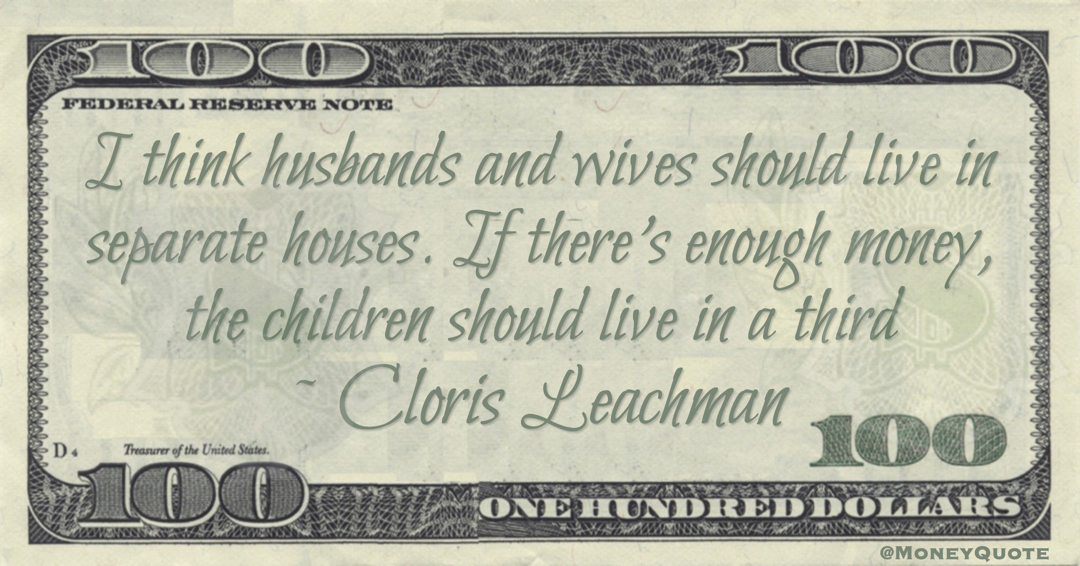 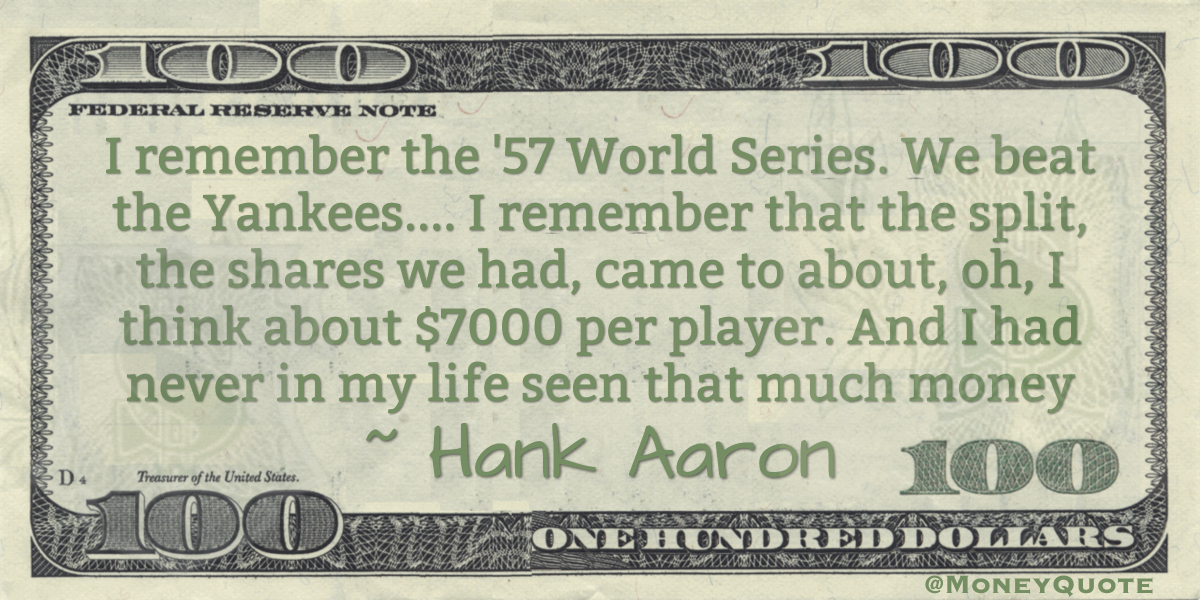 “I remember the ’57 World Series. We beat the Yankees … I remember that the split, the shares we had, came to about, oh, I think about $7000 per player. And I had never in my life seen that much money” — Hank Aaron 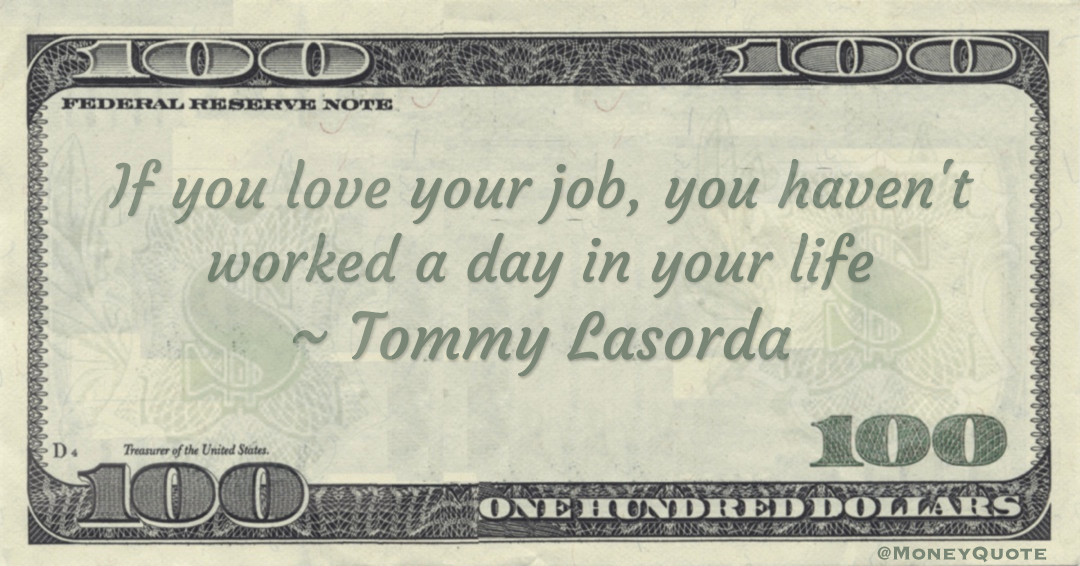 “If you love your job, you haven’t worked a day in your life” — Tommy Lasorda 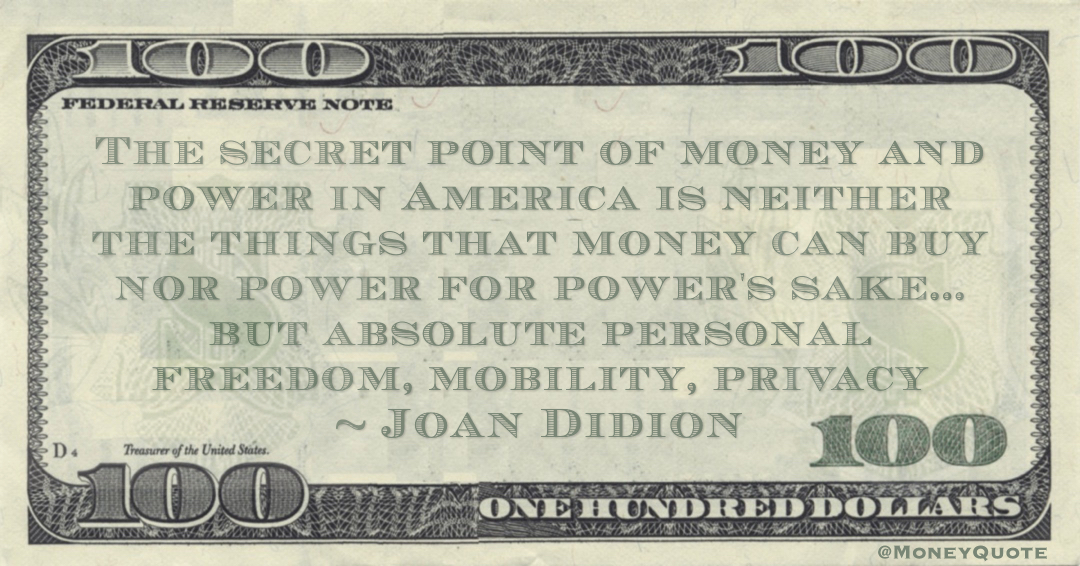 “The secret point of money and power in America is neither the things that money can buy nor power for power’s sake… but absolute personal freedom, mobility, privacy” — Joan Didion 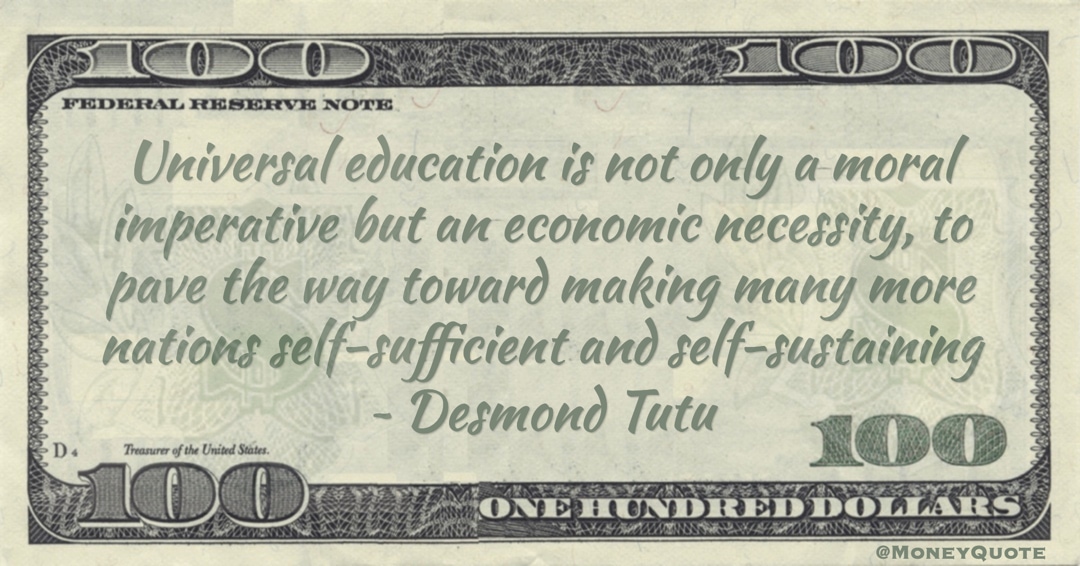 “Universal education is not only a moral imperative but an economic necessity, to pave the way toward making many more nations self-sufficient and self-sustaining” — Desmond Tutu 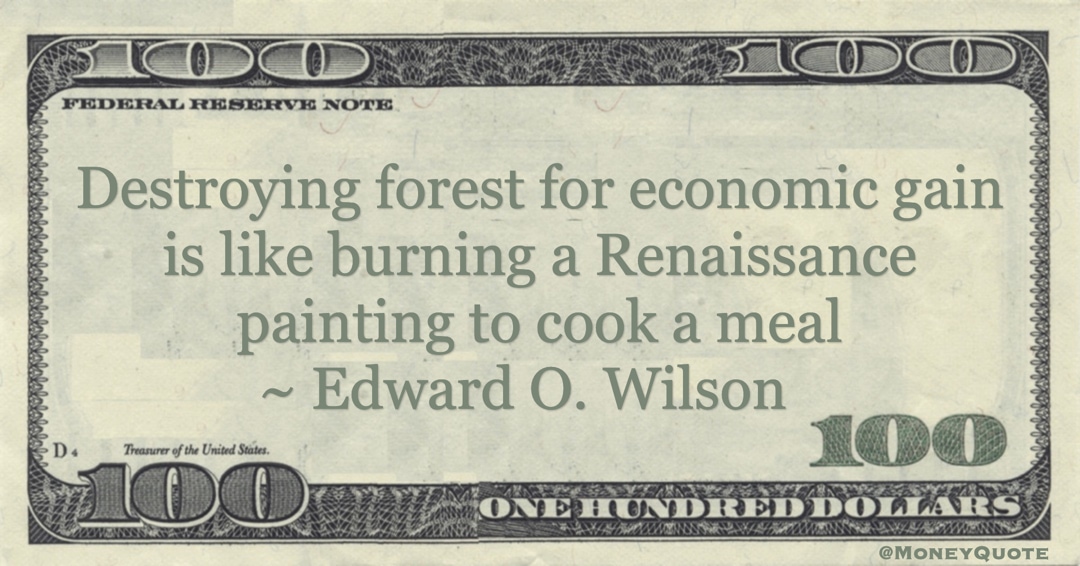 “Destroying forest for economic gain is like burning a Renaissance painting to cook a meal” — Edward O. Wilson 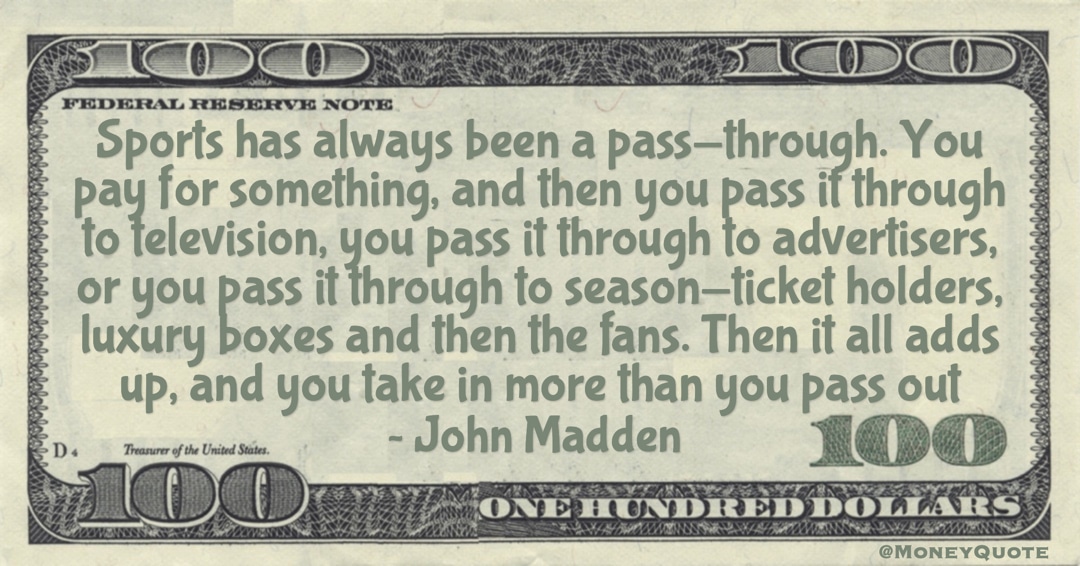 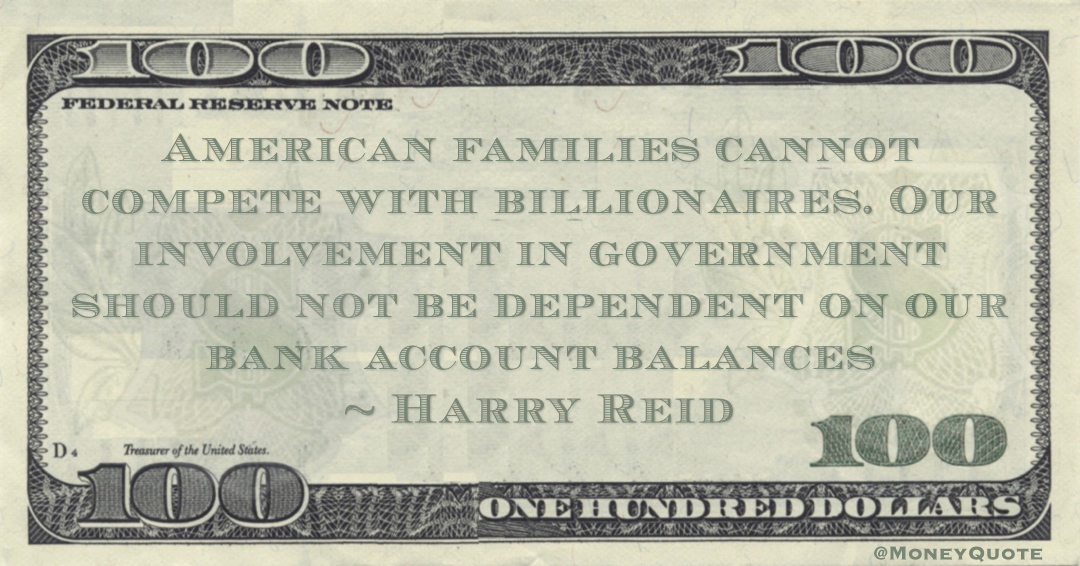 “American families cannot compete with billionaires. Our involvement in government should not be dependent on our bank account balances” — Harry Reid

“I’m just happy as a lark having a good health. People say are you thinking about retiring, I don’t have time to think about retiring” — Betty White