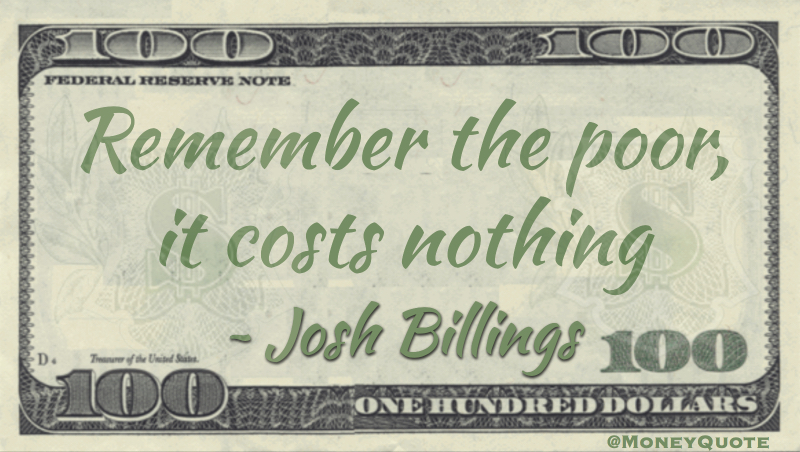 “Remember the poor, it costs nothing” — Josh Billings

For 60 days I’ve been posting money quotations on Poverty and the Poor in preparation for this one day – Blog Action Day – Poverty – where over 9000 bloggers have agreed to discuss, explore and seek solutions to poverty. (Even the MySpace Impact Channel got into the Poverty conversation on their blog

My decision to support #BAD08, as it’s come to be called on Twitter, was out of a desire to continue expanding my collection of Money Quotes on this blog. But, inevitably I got more interested in the topic and in learning something about Poverty – through words – but not just blather, these are some of the most powerful words ever uttered about the Poor and Poverty.

In the two months since I started collecting and posting quotations, I found over 150 Poverty Quotes in the larger collection of quotes on the poor, Here are a dozen to get you started.

Muhammad Yunus, founder of the Grameen Bank said, “One day our grandchildren will go to museums to see what poverty was like” and truly believes we can cut global Poverty in HALF by 2015!

Most powerful quote on poverty from a politician IMHO was Dwight D. Eisenhower, who said in 1953, “Every gun that is made, every warship launched, every rocket fired signifies, in the final sense, a theft from those who hunger and are not fed, those who are cold and are not clothed”

Many politicians, as a matter of fact, had something to say of poverty – from Thomas Jefferson, “Experience demands that man is the only animal which devours his own kind, for I can apply no milder term to the general prey of the rich on the poor”

To Ronald Reagan, “Poverty is a career for lot’s of well paid people”

There are those who devote their lives to the poor,

There are those who poke fun at poverty, “Money is better than poverty, if only for financial reasons.” — Woody Allen

Some believe it’s sometimes better to be poor, “Satan is wiser now than before, and tempts by making rich instead of poor” — Alexander Pope

Some flatly state the obvious, “I’ve been rich and I’ve been poor: Rich is better.” — Sophie Tucker

And even more obvious, “A rich man is nothing but a poor man with money.” — W.C. Fields

Some point out misconceptions “Literary tradition is full of lies about poverty—the jolly beggar, the poor but happy milkmaid, the wholesome diet of porridge, etc.” — Mason Cooley

There is the frightening commentary from Colin Powell, “Terrorism really flourishes in areas of poverty, despair and hopelessness, where people see no future”

And in the end, it really doesn’t matter whether we are rich or poor,